SALT LAKE CITY (AP) — After Brigham Young University two weeks ago dropped a section from its strict code of conduct that had prohibited all expressions of homosexual behavior, bisexual music major Caroline McKenzie felt newfound hope that she could stop hiding and be herself. She even went on a date with another woman. That optimism was pierced this week when administrators at the university owned by The Church of Jesus Christ of Latter Day Saints clarified in a letter posted online Wednesday that “same-sex romantic behavior” was still not allowed on campus. The letter said the recent revision to what is known as the “honor code” didn’t change the “moral standards” of the church or the faith’s opposition to same-sex marriage. McKenzie said it made her feel whiplash and that her religion was telling her she was dirty for who she is and unwanted by God. She’s reassessing whether she wants to finish her studies at BYU even though she loves her professors and the education she’s receiving. 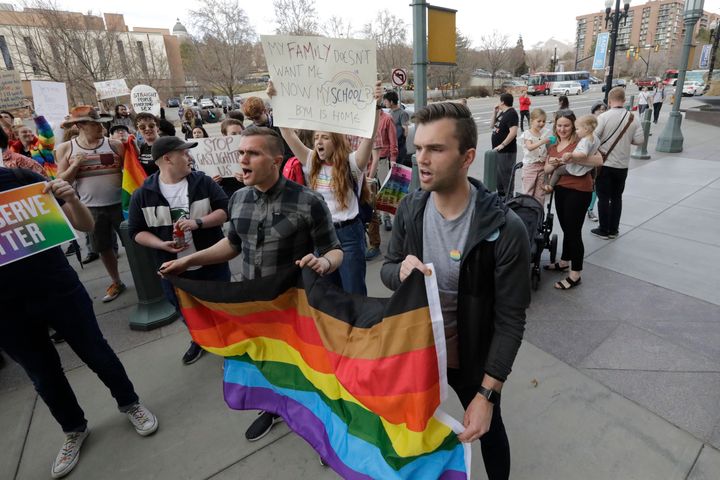 ASSOCIATED PRESSSeveral hundred Brigham Young University students protested Friday to show their displeasure with a letter this week that clarified that “same-sex romantic behavior” is not allowed on campus. “It’s psychologically damaging,” said McKenzie, 23, of Kaysville, Utah. “It has been a roller coaster the last couple of weeks. This last Wednesday pretty much destroyed me. It felt like I was drowning again.” She was one of several hundred people who protested Friday afternoon outside church headquarters in Salt Lake City to cap off a week of fury and heartbreak for LGBTQ students and their straight allies. They sang hymns and chanted “have no fear, God loves queers” as they held rainbow flags. They held signs that read “Love one another,” “Jesus loves everyone” and “Bigotry wrapped in prayer is still bigotry.” McKenzie held a sign that said, “My family doesn’t want me, now my school? BYU is home.” It referenced a lack of support from her family after she came out last summer. As they chanted loudly, “We’re here, we’re queer, we’re done living in fear,” many stared up at windows in the church headquarters. The Utah-based religion of 16-million members worldwide has tried in the last decade to create a more welcoming environment for LGBTQ members, while adhering to its doctrinal opposition of gay marriage. The faith, widely known as the Mormon church, teaches that while being gay is not a sin, engaging in same-sex relationships is against God’s commandments. 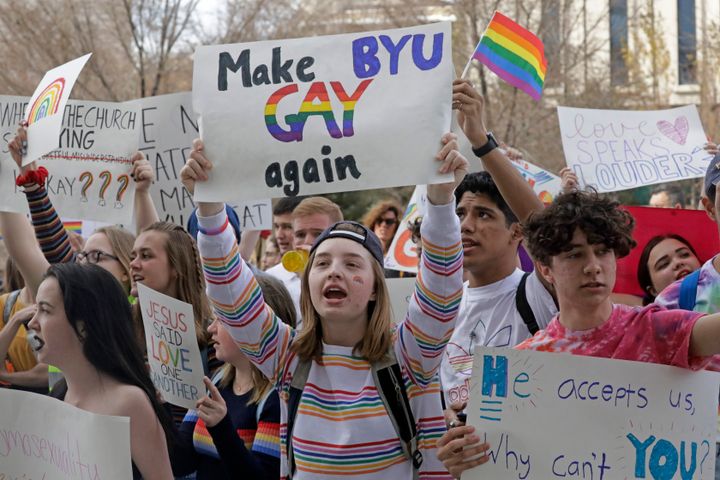 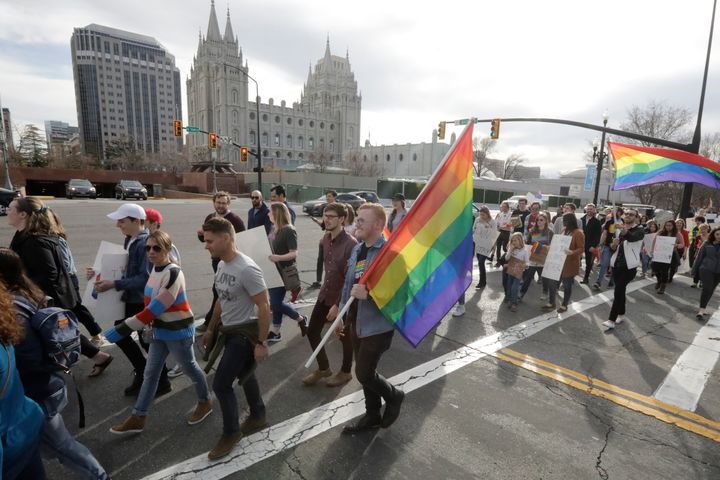 ASSOCIATED PRESS“We are deserving of love and acceptance, and we are not going away,” one student said. Church members Joey Pierson and Luke Larsen held hands as they chanted and sang along Friday at the rally. The young couple that identify as gay are still in high school, but came out to support fellow gay Latter-day Saints who attend BYU. “I’m tired of feeling so suppressed and not feeling the love that God wants us to feel,” said Pierson, 18. “It’s time to show what God’s love looks like and that his God is unconditional and infinite and reaches everyone, not just straight people and not just celibate gay people.” Caloway Williams, a BYU senior who is gay, called the letter a slap in the face that he interpreted to meant his faith doesn’t love or accept LGBTQ people. He called it infuriating to hear top leaders speak of their love for everyone and then see policies that don’t match that principle. “I want them to know it’s not OK what they have done. These are people’s lives they are messing with,” said Williams, 24, of Minot, North Dakota. “We are deserving of love and acceptance, and we are not going away.” 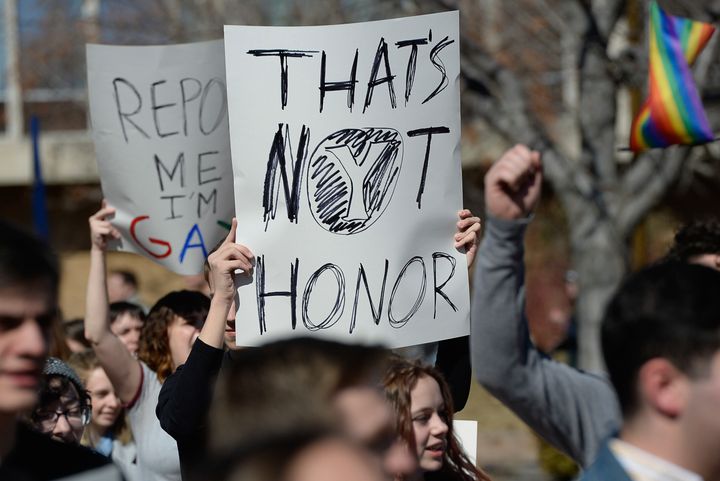 ASSOCIATED PRESSThe Mormon church teaches that while being gay is not a sin, engaging in same-sex relationships is against God’s commandments.
33 عرض0 تعليق

Surprise, Surprise: Off-Duty Cops From All Over the Country Were in D.C. During Capitol Coup Attempt